Queenstown’s The Landing has nationwide appeal

Queenstown’s The Landing has nationwide appeal

Queenstown’s newest shopping centre is drawing in businesses and shoppers from all over the country, as The Landing continues to expand the town’s retail offering.

Located in Frankton close to Queenstown airport and Remarkables Park retail centre, The Landing opened in December 2014 and has so far welcomed new tenants from as far as Australia, Auckland and Christchurch.

Director Lindsay Williams said it was an “exciting” opportunity for international and national brands to open up for business in Queenstown, as the town continues to grow with new residential and commercial developments taking shape and record-breaking visitor numbers.

“This area of Queenstown in particular is benefiting from recent development and growth,” he said.

“Over the last year, we’ve seen new housing at Shotover Country and more to come at Bridesdale Farm, a significant airport expansion, a new hotel scheduled to open early next year and a new high school building at Remarkables Park.

“It’s given national businesses the confidence to invest heavily in their Queenstown and South Island presence.”

Nationwide companies such as Repco, Snap Fitness and House of Travel have all identified Queenstown as an important retail hub, opening their doors at The Landing over the last few months.

Hospitality suppliers such as Neat Meat and The Artisan Bakery offer Queenstown restaurants high-quality provisions right on their doorstep, a particularly attractive concept as businesses increasingly chose to source locally.

Other tenants have chosen to re-locate their entire businesses to Queenstown, not only taking advantage of the heightened commercial potential the town oozes, but also to pursue a better lifestyle.

Auckland-based artificial flower, gift and furniture shop Everlasting Daisies was packed into three 20 foot containers and shipped to its new home at The Landing by owner Di Bowbyes.

Originally from Temuka, near Timaru, Di had always considered re-locating to Queenstown but finally made the move when a “too good to miss” opportunity arose.

“Initially, it was more of a lifestyle choice for me. I’ve friends and family in Queenstown and have always hoped to return to the South Island,” she said.

“But when I saw the vacancy for space in The Landing it all fell into place – it was a no brainer really.

“I was lured in by the fantastic location and great parking, which brings in plenty of foot traffic – as well as the compatibility with surrounding businesses.

“I’ve had customers pop in for a look after they’ve picked up a coffee from Odelay Café or a burrito at Zambrero – everyone is so friendly and supportive.”

Di uses her shop front at The Landing as a showroom for her business, presenting the full range of artificial flowers available for weddings, parties, home fittings, restaurants, shops, and bars.

Opening in September is a new business, owned by Bevan and Amanda Gould. The couple, dairy farmers for 25 years from Alexandra, are starting a new venture selling modern and contemporary furniture.

“We identified a gap in the market and saw lots of opportunity at The Landing to stop people leaving town in the search for great quality furniture,” said Bevan.

Moving into The Landing in October is Queenstown Interiors, an established business re-locating from its former premises at Glenda Drive. Owner Julia Foley has been at the forefront of the interior design industry in Queenstown since 2001 and is looking forward to being more “visible.”

“Moving my business to this prime location in Frankton means I’m much more accessible to my customers,” said Julia.

“I’m expanding my offering to include the Citta brand along with a great range of curtain, upholstery, fabrics, furnishings and accessories.

“I know I’ve moved just at the right time as sought-after spots like The Landing don’t come up that often.”

Shoppers, as well as businesses, are now coming from far and wide to experience the latest retail offering in Queenstown.

“I’ve heard of customers from Wanaka, Cromwell and Southland all heading to Queenstown for a shopping trip,” said Lindsey.

“It’s a trend that I don’t see slowing down any time soon. We’re quickly becoming the shopping destination for the South.”

The Landing is nearly full to the brim with exciting new shops however there’s still an opportunity for businesses to extend their reach. Three premises are still available for lease, ranging in size from 79m2 to 216m2. 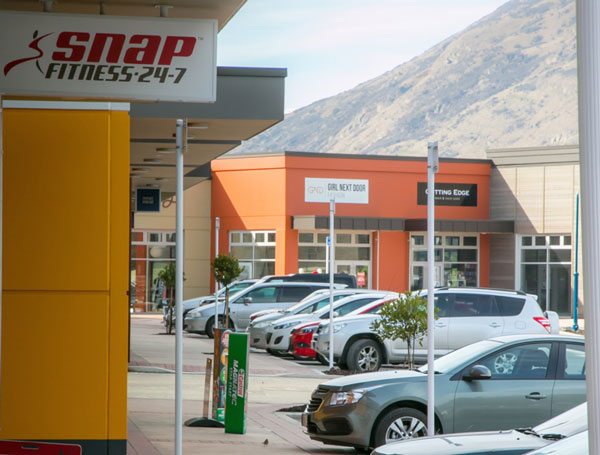